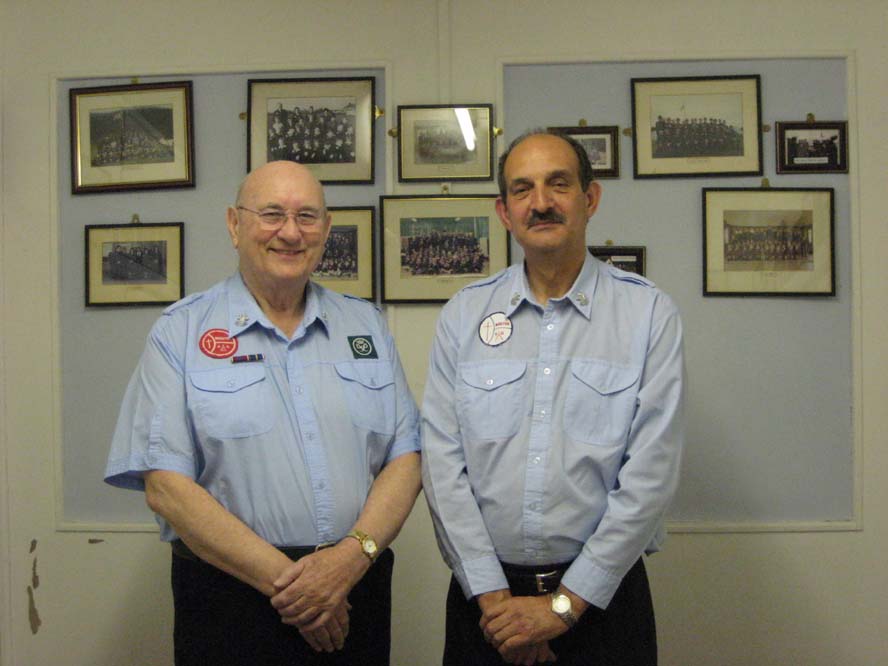 Geoff Crompton
In the mid 60’s Geoff, who then worked for ICI at Runcorn, was transferred to a new job in Northwich. After two or three years travelling to and fro he and Lois, his wife, took the decision to up sticks and to move to Mid-Cheshire with their two year old daughter Gillian. They purchased a bungalow in Eaton View and settled down to enjoy village life.

Having spent most of his younger life as an Officer and boy in the 1st Widnes Company of the Boys’ Brigade and been instrumental in forming a new BB Company in Runcorn in 1959, Geoff was no stranger to voluntary youth work. In 1968, having seen that there was little to do for young lads in the village, he approached the elders of the Methodist Church and asked if they would be interested in the idea of him forming a new youth organisation in the Chapel Hall on one evening a week. The elders of the Chapel were delighted and gave the scheme their blessing.

Geoff then had a problem. Did he have the time to run a BB Company and all that that entailed, or should he form a new hybrid group more suited to the time he had available? He decided on the latter course and with the help of his wife deliberated long and hard about the form the group should take. After much thought he came up with the notion of a group centred around three main tenets: 1) Christian principles 2) Service to the community and 3) Adventurous activities.
Lois thought up the name for the new organisation – ‘The Moulton Adventure Group’ and Geoff worked on the ‘Object’, ‘Promise’ and ‘Motto’. A crest, basic uniform and badge system was devised and armed with these Geoff started to beef up the detail and to plan the activities.

Much taken with the concept of the Duke of Edinburgh’s Award Scheme whilst in the BB he contacted the chairman of the local D of E Award Committee – Mr Doug Myerscough, Headmaster of Rudheath County Secondary School.
A meeting was arranged, and it was during this meeting that Geoff struck gold, for he was told of a young married man, Les Burgess, a Gold D of E Award winner at 17, who had recently moved into a bungalow on Weaver Grange, not 70 yards from where he lived! On the following Sunday afternoon, Geoff knocked on the door of ‘Tryfan’ and a friendship, which is still strong to this day, was formed.

Les Burgess
Les first completed the Bronze and Silver Duke of Edinburgh’s Awards while still at Rudheath School between 1957 & 1959 under the guidance of Mr Doug Myerscough the Headmaster who was running the scheme. He completed the Gold Award aged 17 in 1961 while working as an apprentice with British Railways in Crewe. After completing the Gold Award he and his climbing partner Charles Lishman joined the Mid Cheshire D of E committee run, by Colonel Denton and Doug Myerscough, as expedition trainers and trained scores of young men, and latterly young women to pass their Gold award expeditions. Les was a committee member and finally chairman for over 30 years finally handing over the reigns in 1991. Les also had time to participate in a mountaineering and cultural expedition to Poland and Slovakia over 2 months in 1965 led by Lord Hunt of Everest fame. Meanwhile after setting up home in Moulton village in 1967 he was approached by Geoff Crompton with a proposal to start a youth group for boys in the village.

The Early Days
Geoff and Les then started to scrounge around for money and equipment to enable them to run the Group. They managed to pick up a much used vaulting box and springboard from Sir John Deans GS, a set of parallel bars from Cuddington Youth Club, an old mattress and various other bits and bobs. By now news of the new group was out and two others were encouraged to help – Ray Woodrow and Tony Darlington. In addition, two 17 year old lads, stepped forward and asked to be included – Alan Bennett and Andrew Knight. By the end of 1970 Malcolm Fleet, Aden Pimblett and Alan Slack had also swelled the staff ranks.
So, on an evening in early October 1969 the Moulton Adventure Group opened the Chapel Hall doors to their first nine recruits – and the rest is history. The Group’s first home was the Methodist Hall, in Chapel Street. The two sons of Les eventually joined and enjoyed their stay with the Group for many years.
The Group is now 40 years old and still a source for good in the community. Things have moved on but the basic principles are still more or less the same.

During the late 70’s and 80’s a small number of staff and parents, led by Harold Mitchell, toiled for seven years to both dissemble, transport and re-erect a two story building donated by Messrs L Thomason & Co., and on site at Shell Ltd, Carrington. This was acquired by Alan Slack and is now the Groups Headquarters in School Lane, opposite the Primary School and valued today at £200k.

Later
In 2002, after 33 years service to the Adventure Group and 15 years with the Boys’ Brigade in Widnes and Runcorn, Geoff retired from active voluntary youth work. However, he is still involved with the village having written a book of dedication entitled ’34 MEN’ in honour of the men of Moulton who died in WW1. In 2005 Geoff published a second book of dedication; this time to the 12 men who died in WW2 entitled ‘ANOTHER DOZEN’. In 2007 he published a book describing the first 30 years of camping with the Moulton Adventure Group.  All proceeds from these books are for service charities, the NSPCC and the MAG. He is a member of St. Stephens Church and also Moulton British Legion. .  Between 2005 and 2007,  Geoff served as the Resource Officer (Scrounger!!) for the Group  to raise money for equipment and the like.

​Les still works hard for the youngsters of Moulton, is currently  a Trustee  and serves on the Management Committee. Although he is coming to an age when most youth leaders put their feet up, he still enjoys the challenge and wants to carry on giving what he can to the youth of Moulton and the surrounding area for some years to come.